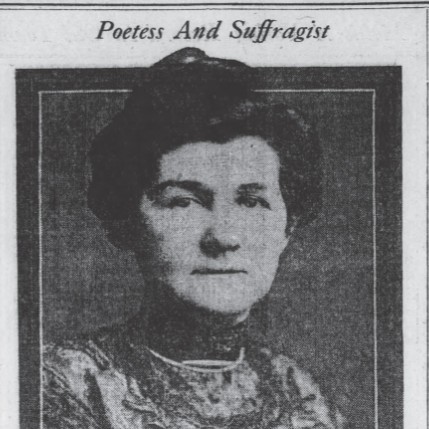 Nannie V. Melvin, a journalist, social reformer, and political activist, is one of the Maryland women credited with planting suffrage club chapters on the Eastern Shore for the Just Government League. Her daughters were also suffragists: Anne Delia Melvin and Mary Melvin. Anne Delia Melvin organized many Baltimore suffrage events. She was involved in planning the Women’s Suffrage Parade in Baltimore City, which attracted thousands of suffragists to the city. Mary Melvin joined the movement while she was a student at the Women’s College in Baltimore.

Watch the video episode on the Melvin family and their work in the Women’s Suffrage Movement here:

The women’s suffrage movement is often depicted through an urban lens, documented by photos of marches and rallies filling city streets. For Marylanders, it is important to remember that the movement also spanned the Chesapeake Bay to include women of the agricultural Eastern Shore.
Nannie V. Melvin, a journalist, social reformer, and political activist, is one of the Maryland women credited with planting suffrage club chapters on the Eastern Shore for the Just Government League.

Founded in Baltimore by Edith Hooker in 1909, the Just Government League recognized early its need to broaden its base statewide, both to increase its political clout and use its voice on behalf of Maryland women. Its leaders strategically employed field secretaries, women who traveled state byways to organize events, canvass communities, engage local media, call on local women’s societies, and gather intelligence on support and opposition to women’s enfranchisement. Nannie Melvin and her adult daughter Anne Delia Melvin were hired among the early field secretaries for the League. Often working at their side as a volunteer was Nannie’s second daughter, Mary Melvin, an ardent suffragist who joined the movement while she was a student at the Women’s College in Baltimore (known today as Goucher College, and now located in Towson).

The activism of the Melvin women, and especially Nannie’s efforts, helped the Just Government League grow across the Chesapeake Bay. Nannie was uniquely qualified for this work: She knew the waterways and backroads of the Eastern Shore. She was politically savvy. And as a journalist, she had connections at many of the state’s newspapers, which she used to gain attention for her work and the cause.

Nannie was born in 1865 in Hillsborough, Caroline County, to the wealthy wheat farmer and two-term state senator Thomas Frederick Garey (1821–1886). As a young woman, Nannie achieved acclaim as a writer with poems and essays published in the magazine Puck, The Baltimore American, and her hometown paper, The Denton Journal. She married the Denton newspaper’s owner, James Fisher Melvin, in 1883. They moved to Ellicott City, where he founded the Ellicott City Times; one source identifies Nannie as the associate editor. In Ellicott City, they raised the two daughters and two sons. The Melvins split in 1905 when James moved to Western states to launch more newspapers. Nannie became a working single mother and moved to Baltimore to support Mary, who was then studying at the Maryland School for the Blind. News reporters of the day closely followed Mary’s academic achievement, and frequently compared her to her contemporary, Helen Keller. By 1910, Nannie was an independent woman supporting two students at The Women’s College. She told reporters that daughter Mary Melvin’s passion for women’s suffrage inspired her to go to work for the Just Government League.

In a first-person article in The Baltimore Sun in December 1910, Nannie Melvin describes in detail a boat trip she made for suffrage work across the Chesapeake Bay. (Remember that the Bay Bridge was not constructed and opened until 1952, so the crossing was by water transit.) With the boat bucking against a snowstorm, she landed in Cambridge hours behind her schedule. Next came a ride up the Choptank River to Denton. Along the way, she polled fellow boat passengers about their views on women’s suffrage — and she took notes and names. Town by town, she collected names of pro-suffrage sympathizers and antis (that is what suffragists called their opponents). She dined with women’s clubs and delivered speeches, and she used family connections to gauge the climate for women’s enfranchisement in Eastern Shore towns.

During her tenure working for the Just Government League, she would repeat this journey over the water many times. During breaks in the school calendar, it is evident that her daughters traveled as well: News articles from the Eastern Shore describe their involvement in campaigning in Shore towns. From 1910 through 1912, she organized and reported on suffrage clubs in Cecil, Caroline, Dorchester, Wicomico, and other counties – and in Delaware. She also reported on activity by other suffrage organizations in the region.

Nannie Melvin established an office for the Just Government League in Denton in September 1911. In it, she provided a waiting room where farm women could gather to talk, whether they were interested in suffrage or not. In farm communities, she noted, women often were isolated, and needed connection. In October 1911, she founded the Just Government League of Caroline County.

At Nannie’s invitation, Anna H. Shaw, president of the National American Woman Suffrage Association (NAWSA), spoke at Denton’s courthouse in 1911. That year, Melvin led a delegation of Caroline County women to Baltimore to hear British suffragist Emmeline Pankhurst speak at the Lyric. On Election Day 1911, in borrowed car festooned with signs, Nannie and other rode 90 miles of Caroline County byways to give speeches and distribute suffrage leaflets at polling places.

In February 1912, suffragists from the Eastern Shore sent “a deluge” of telegrams to the state legislature in Annapolis. They called on the House Committee on Constitutional Amendments “to report favorably” on a Woman’s Suffrage bill proposed by the Just Government League. Nannie Melvin’s telegram read: “Eastern Shore women are ready and desire the ballot.” When the proposed state constitutional amendment failed, Melvin’s group then asked Caroline County voters to make a pledge: Vote only for candidates who support women’s suffrage during the next Maryland primary.

Ever a trailblazer, Nannie moved on to a career as a policewoman, probation officer, and reformer of corrections programs for women. She died in Sacramento, Calif., on May 14, 1942.

And what became of her daughters?

During and after her student years at the Women’s College, Mary Melvin delivered open-air speeches for women’s suffrage. Mary marched in the 1913 Women Suffrage Procession in Washington, D.C. When bystanders harassed the marchers, newspapers took note of Mary’s presence in the march. Melvin was drawn into the U.S. Senate investigation of police security failures at the march, when a witness claimed that “the blind girl from Goucher” was jostled by the crowd and harassed by hecklers. With her mother’s help, Mary submitted testimony to the Senate panel. Mary Melvin furthered her training in occupational therapy and teaching at the Connecticut School for the Blind and at San Jose State College. She became a noted teacher for blind and sight-impaired adults and was hired by the Washington State Department of Social Security to make home visits in Spokane and Walla Walla. She died in Walla Walla in 1951, and her death was mourned by Goucher College Alumnae.

Anne Delia Melvin organized many Baltimore suffrage events. She was involved in planning the Women’s Suffrage Parade in Baltimore City, which attracted thousands of suffragists to the city. It was organized by the Just Government League to coincide with the Democratic National Convention of 1912, which was held at the Fifth Regiment Armory. In addition to her work behind the scenes, Anne Delia donned the costume of Joan of Arc and rode a white horse in the parade. Anne Delia believed in the importance of youth recreation. For many years, she was the director of one of the first public recreation centers in Baltimore. She attended national conferences on recreation centers and spoke of their service to communities, as well as their important role of bringing diverse people together for the betterment of the city. Later, like her mother, she was involved in policing reforms, and traveled widely to help enable her sister Mary’s education and career. Anne Delia died in Southern California in 1939.