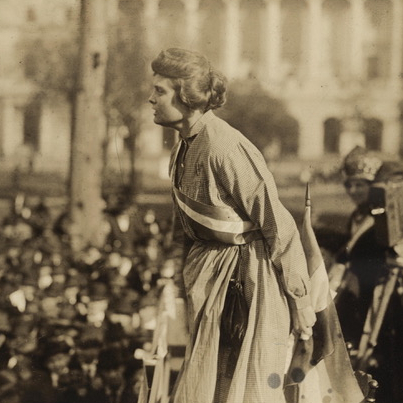 Two of the gutsiest Maryland women who fought for the 19th Amendment were Lucy Fisher Gwynne Branham and her daughter Lucy Branham. Both Branhams joined the National Women’s Party, one of the more progressive and roucus suffrage organizations. The ideals of the NWP aligned more with both Branham’s belief that women didn’t need to “win” the right to vote but, rather, their rights as citizens had been denied to them.

Two of the gutsiest Maryland women who fought for the 19th Amendment were Lucy Fisher Gwynne Branham and her daughter Lucy Branham.

Some of their southern-based family disapproved, but it didn’t stop mother and daughter from picketing and travelling the country to get women into the voting booth.

The younger Lucy Branham would come to be one among the most visible suffrage crusaders, but both Branhams were arrested and jailed for their belief that women didn’t need to “win” the right to vote but, rather, their rights as citizens had been denied to them.

The exact birthdate date of Lucy Fisher Gywnne Branham the elder is not known. Her husband, Dr. John W. Branham, was an assistant surgeon in the U.S. Marine-Hospital Service, and was stationed in Stapleton, N.Y. The Service sent Dr. Branham to Georgia during a yellow fever outbreak. He instead became sick himself. His death left Mrs. Branham with two infant children, including daughter Lucy, and not much money.

Born in 1892, in Kempsville, Virginia and raised in Baltimore, daughter Lucy graduated from Washington College in Maryland with a history degree. She earned a master’s degree from Johns Hopkins University and a Ph.D. from Columbia University. These were remarkable accomplishments for a 19th century woman.

Branham wasn’t just smart, but apparently fearless as well. When she was 23 years old, she saved the life of a drowning woman in Florida. Branham saw Miss Dema Nelson struggling in the water. She ran 150 feet to the end of a dock. Fully dressed except for her shoes, she dove in and swam to Miss Nelson, who was nearly unconscious. She pulled her to shallow water, where other help awaited. For her actions, Branham was awarded a Carnegie Hero Medal, a prestigious award given to people who risk their lives to save others.

Both Branhams joined the National Women’s Party, often called the NWP,which was organized by Alice Paul and Lucy Burns in 1913. The NWP wanted the women’s suffrage issue resolved once and for all on a national level by a constitutional amendment. To get their point across, Paul and Burns were inspired by the raucous labor activist parades and protests in Great Britain that brought attention to the cause of workers and the women’s movement.

NWP members were more way more rebellious than their counterparts in the National American Women’s Suffrage Association. While those suffragists gave speeches in auditoriums, gathered in parlors and met quietly with their legislative representatives, NWP members took to the streets. They picketed, paraded and openly challenged President Wilson to bring the weight of his office to passing the 19th amendment.

There wasn’t much progress. Over time, the NWP believed that President Wilson was not taking them seriously, and the NWP arrived at a more radical strategy: to protest in front of the White House.
Today, political rallies happen there most days. However, these were the first civil rights demonstrations in history to take place at the White House and across the street in Lafayette Square.

Some regarded the suffragist demonstrations in Washington DC as frivolous since the US was facing the real possibility of entering a world war. To suffragists though, it was hypocritical for President Wilson to tell the world that we were fighting for democracy while denying half of its population the right to vote.

The NWP moved to a unique protest style. Instead of shouting and singing, the women did not utter a word. They simply stood, stylishly dressed in dark coats and white sashes and carried pointed messages on hand-written signs.

Both Branhams took part in these protests, known as the Silent Sentinel demonstrations, throughout 1917.

The Silent Sentinels appeared at the White House every single day. Onlookers threatened and taunted them. It was variously hot, cold, windy and rainy through the seasons.

The NWP had at least one advantage. Its headquarters at 722 Jackson Place was just steps away from the White House, allowing women to easily fortify their colleagues with drinks, hot bricks and friendship.

They pressed on despite the emerging World War, afraid that the war would distract from their cause.

Not surprisingly, tensions rose and President Wilson became irked with the ongoing spectacle.

Police began to arrest the women, including the younger Lucy, for “obstructing traffic,” not a crime. The women refused to pay the fines, arguing that they were being punished for political beliefs.

Police, most never believing for a moment that the NWP women would take jailtime instead of paying a fine, then delivered these so-called criminals to the District jail. At first, they were sentenced to just a few days in jail. Later, sentences eventually stretched to weeks and months.

Occoquan was a sordid place of dirt, rats and cruel guards. No family contact was allowed. At times, guards physically threw their detainees into concrete cells with open sewage.

Women like Lucy Branham continued their protest inside with hunger strikes. Jail officials fed them by force, a painful and traumatic procedure in which guards tied the women down, inserted tubes in their noses and throats and filled them with raw eggs and milk.

By then, word began to spread about this treatment. Many disagreed with the idea of women’s suffrage but still found these punishments appalling.

President Wilson started to soften his opposition to the suffragists. However, the NWP believed that he was not moving fast enough.
Undaunted, both NWP women and the Branhams, pressed on.

The NWP devised a new protest strategy. In those days, President Wilson touted the US’s cherished belief in democracy as justification for entering World War I. The women believed that Wilson was a hypocrite: He travelled the world giving speeches about democracy while the women of the US could not represent themselves at the polls.

Members gathered with copies of the president’s speeches and burned them in urns outside the White House. Both Branhams, and many others, were arrested during these “Watchfires of Freedom” protests.
The NWP were masters at the art of public relations to change people’s minds about suffrage. When the jailing of women eventually came to a stop, the NWP opted to continue to tell the story of the horrific treatment, this time all over the country.
In February 1919, 26 members of the National Woman’s Party, including Lucy, boarded a chartered train called the Democracy Limited and set out from Washington, D.C. They visited cities from east to west and spoke to large crowds about their experiences as political prisoners at Occoquan Workhouse. To bring the point home, they wore their prison garbs and minced no words about the poor food, violence and forced feeding that they endured. One of the most famous photos of the suffrage movement is of Lucy Branham, dressed in prison garb, calling on the crowd to support suffrage.

Finally, the 19th amendment was passed June 4, 1919, and later ratified on August 18, 1920.
By the end, the Branhams and women who fought for suffrage demonstrated for days on end in all kinds of weather. They travelled thousands of miles on trains, motorcars and on foot. They endured spitting, heckling, physical assaults and vicious treatment in jails.

Decades later in the 1950s, the Branhams lived out their lives at the National Women’s Party headquarters in Washington DC, now the Sewall-Belmont House. Tragically, after the elder died, her daughter was so overcome with grief that she required a long period of hospitalization.

Today, most of us have the luxury of stepping up to a polling place and casting a vote without second thought. It’s just the way that Lucy Fisher Gwynne Branham and her daughter Lucy Branham would have wanted.

Lucy Branham with posters, 1919. Photo from Library of Congress.