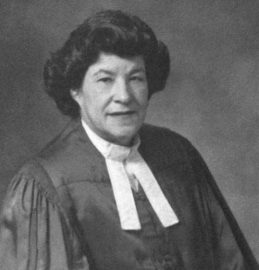 This week on Ballot and Beyond, we’ll learn about Rita C. Davidson, who had a remarkable career as a lawyer and judge, read by Shauntee Daniels, Executive Director of the Baltimore National Heritage Area.

Judge Rita C. Davidson made legal history, speaking her mind for families all the way up the legal ladder of her appointments. After she earned degrees from Goucher College and Yale Law School, she began to practice law in Montgomery County and became involved in local politics.

Then, in 1970, Davidson achieved the first of a number of firsts, when she was appointed to the cabinet of the Maryland governor. Governor Marvin Mandel named her head of the Department of Employment and Social Services, now the Department of Human Resources.

According to the Washington Post, she was one of the most controversial and outspoken members of the governor’s cabinet, fighting for higher welfare payments for the poor and larger budgets for what she considered to be underfunded welfare agencies. The governor then selected her to Maryland’s second-highest court in 1972, making her the first woman to serve in the Court of Special Appeals, fulfilling her childhood dream to be a judge.

In 1979, Davidson was appointed to the Maryland Court of Appeals, the first woman in the 200-year history of the state’s highest court. The governor said that her gender was not a controlling factor and that she was simply unsurpassed among the candidates in terms of scholarship, intellectual capacity, and breadth of experience.

At that time, she said of her appointment that “It was a singular honor and a somewhat awesome experience to contemplate being the first woman on the highest court in my state.”

Her colleagues said that she repeatedly demonstrated that she was not only a person of large intellect but one of great compassion. Rita often times marched to the beat of a different drum, her own.

Davidson died at the early age of 56 in 1984. Davidson earned admission into the Maryland Women’s Hall of Fame in 1985.

Through her life’s work, Judge Rita C. Davidson established beyond doubt through her writing and by her life that she was philosophically a liberal, physically courageous, and mentally persistent.