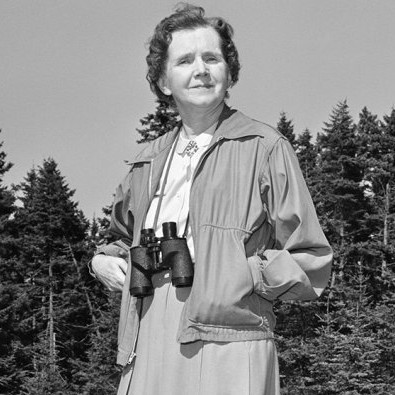 Rachel Carson changed our world for the better, quite literally, with her 1962 book “Silent Spring,” bringing attention to the contamination of our environment by the use of pesticides. Consequently, Carson gained the title of “the mother of the modern environmental movement.” Prior to her groundbreaking book, Carson, was a researcher and biologist at the U.S. Department of Interior. Her self-designed home in Silver Spring, Maryland, still stands and is listed on the National Register of Historic Places. Join us on this episode of Ballot & Beyond to hear how Rachel Carson spread environmental awareness through her narrative approach to writing about science.

This week on Ballot and Beyond, we’ll learn about Rachel Carson, the voice of the early environmental movement, read by Meagan Baco, Director of Communications at Preservation Maryland.

Rachel Carson is considered to be the mother of the modern environmental movement. In 1929, young Rachel Carson moved to Baltimore from Philadelphia to accept a graduate scholarship from Johns Hopkins University. But her studies were interrupted by the Great Depression. So she went to work for the Bureau of Fisheries where she received an assignment to write 52 short radio programs on marine life. She also started to write freelance articles about the Chesapeake Bay for the Baltimore Sun and other publications.

By 1941, she had been promoted to aquatic biologist at the US Department of the Interior. That same year, she published her first book, Under the Seawind. A few years later, Carson proposed an article to Reader’s Digest magazine about DDT, the first modern synthetic insecticide.  The article was rejected for being too unpleasant.

Undeterred, she wrote a second book, The Sea Around Us, about the life-giving and life-sustaining qualities of the sea and our relationship with water, according to one review. The book sold more than 1 million copies and won awards, including the National Book Award for Nonfiction.

When Carson resigned from the government, she began to write full-time and take on more environmental battles including against DDT and other pesticides.

She wrote that the federal government’s use of a pesticide to combat imported fire ants had so much serious collateral damage that it was the agricultural equivalent of the atomic bomb. In her 1962 book, Silent Spring written at her self-designed home in Silver Spring, Maryland, Carson asked, “How could intelligent beings seek to control a few unwanted species by a method that contaminated the entire environment and brought the threat of disease and death even to their own kind?”

The chemical industry attacked her and her agenda. They said that the woman lacked the academic training to be creditable. But biologist, Edward O. Wilson called the book a national political force that is at least partially responsible for the creation of the Environmental Protection Agency and the passage of the Endangered Species Act.

Carson would not live to see the full impact of her work. In the spring of 1964, she died of breast cancer in her home. She was 58 years old.

More than 15 years after her death, President Jimmy Carter awarded Rachel Carson the Presidential Medal of Freedom for her contributions to the national interests of the United States.

Rachel Carson and Bob Hines researching in a tide pool, 1951.

Rachel Carson with binoculars. Image from the CBS Photo Archive via Getty Images.