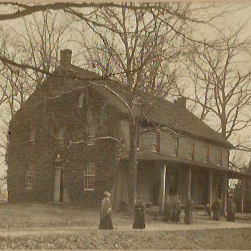 This episode of Ballot and Beyond, contributed by the Maryland Women’s Heritage Center, was written by Pamela Young. The reader is Allison Weiss, Executive Director, Sandy Spring Museum.

Sandy Spring, Maryland, was settled in 1727 by Quakers who strongly valued education and social justice. Many were active in social movements promoting peace and the abolition of slavery. Quakers believe in equality of all persons, so women are considered equals to men. With this emphasis on human equality, education, and justice, it is not surprising that Sandy Spring fostered activism for women’s suffrage. In 1889, a local women’s suffrage association was organized and went on to serve as a hotbed of suffrage activity emanating out of the rural Montgomery County community.

Ballot & Beyond is powered by Preservation Maryland, the state’s largest and oldest non-profit dedicated to public history, built heritage, and cultural landscapes.

Sandy Spring, Maryland, was settled in 1727 by Quakers. Farming innovators, they were socially and intellectually active in their community, valuing education and social justice. Many were active in social movements promoting peace and the abolition slavery. Quakers believe in equality of all persons, so women are considered equals to men. With this emphasis on human equality, education and justice, it is not surprising that Sandy Spring fostered activism for woman suffrage. Some Sandy Spring Quakers, having freed slaves after the Revolutionary War, were instrumental in the establishment in 1822 of the Sharp Street United Methodist Church, the oldest African American church in Montgomery County. Because Maryland laws prohibited assembly of Blacks without white supervision, the land for the church was deeded to three Quaker men, to be held for people of color in Sandy Spring. After emancipation it was transferred to trustees of the church. The Civil War and an unreceptive political climate had quashed suffrage activity in Maryland for more than two decades, but the movement was revived in 1889 when Caroline Hallowell Miller, a Sandy Spring Quaker, organized her neighbors into a woman’s suffrage association. Caroline was a committed suffragist who had attended and spoken at national woman suffrage conventions, often inviting activists from other states to visit Maryland communities to promote suffrage. Other Quaker women who joined her in the local woman’s suffrage association included a sister-in-law, Sarah Thomas Miller, and Sarah’s daughter Rebecca Thomas Miller. Caroline served as the club’s first president, convening it often to host pro-suffrage lectures at the Lyceum on the grounds of the Quaker Meeting House. She coordinated their work with the National American Woman Suffrage Association and sent delegates, including Sarah and Rebecca Miller, to attend national suffrage conventions. In 1892, Caroline merged the Sandy Spring group with the Baltimore City Suffrage Club to form a stronger, larger Maryland Woman Suffrage Association. Because of her advancing age, she served as its president for only one year, and declined re- election. Mary Bentley Thomas was then elected as president. Mary was an activist and leader on both state and national levels. Under her leadership, suffragists set up chapters of the Maryland association around the state, including one for Montgomery County, led by Sarah Miller. Mary regularly attended annual national conventions, giving Maryland updates. In 1906, when the national convention met in Baltimore, she placed ads in the local press urging, “If you are indifferent, come and be convinced.” In her personal scrapbook, now in the Sandy Spring Museum, there are two letters to Mary from Susan B. Anthony discussing logistics for an upcoming convention and for a petition calling for a constitutional amendment enfranchising American women. Mary then testified before committees of both houses of Congress in favor of that proposed amendment. Her scrapbook shows her skill as a writer, with rich examples of her press articles, and original stories. Most fitting, perhaps, she contributed her authorship to the Maryland section of the fourth volume of the History of Woman Suffrage, written by Susan B. Anthony and Ida Husted Harper. The founding mothers of Sandy Spring’s suffrage activism provided strong models for the next generation. Mary’s daughter, Edith Farquhar, is pictured carrying the Maryland flag in the 1913 Suffrage March in Washington, D. C. on the eve of Woodrow Wilson’s inauguration. Rebecca Miller served on the national suffrage association’s executive committee. She also lent her voice through lectures and articles in several publications. She was closely affiliated with the Friends EqualRights Association and served as recording secretary of the Maryland Woman’s Christian Temperance Union, an organization through which many women came to support the woman suffrage cause. Caroline Miller died in 1905, so was unable to see the results of her advocacy materialize, but many other Sandy Spring suffragists were able to celebrate the ratification in 1920 of the 19 th Amendment to the U. S. Constitution enfranchising American women. However, the right to vote was not guaranteed to all American women in 1920. The woman suffrage movement in Maryland, as in much of the U. S., became increasingly segregated by race in the 1890s, as white suffragists came to believe their best chance for winning the vote was to disavow any commitment to Black women’s enfranchisement. While some prominent white suffragists adopted this position, in Maryland, Black and white suffragists worked together on some campaigns, including a campaign opposed to a measure that would have enfranchised only literate or wealthy women in Baltimore. Unfortunately, researchers have not found evidence of suffrage activism among Black women in Sandy Spring, nor suffrage outreach to Black residents by white suffrage leaders. In Baltimore African American activists did form their own woman suffrage group, the Progressive Woman Suffrage Club, that was very active prior to 1920 and continued after ratification with voter education. The founder of that group, Estelle Hall Young, travelled to Montgomery County to help establish woman suffrage clubs there, but there is no record of one in Sandy Spring. Sharp Street Church was destroyed by fire in 1920, so any record of suffrage meetings there would have been lost in that fire. It was rebuilt in 1923 and is a continuing community asset today. While we honor the work of the Sandy Spring Quaker suffragists, we recognize that the story of suffrage advocacy in Sandy Spring may not yet be complete.