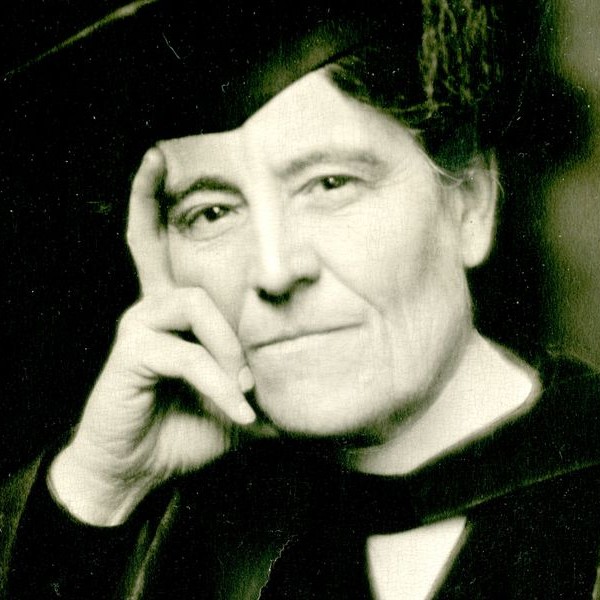 This episode of Ballot and Beyond, contributed by the Maryland Women’s Heritage Center, was written by Tina Sheller, assistant professor of Visual and Material Culture at Goucher College. The reader is Tina Sheller.

During the early years of the twentieth century, the leadership of newly-established women’s colleges played a pivotal role in advancing the cause of women’s suffrage. At the Woman’s College of Baltimore, soon to be known as Goucher College, faculty took an active role in advocating for women’s suffrage and influenced students to join the movement. One of the leading suffragists among the faculty was Lilian Welsh.

Ballot & Beyond is powered by Preservation Maryland and PreserveCast with support from Gallagher, Evelius & Jones and the Maryland Historical Trust.

During the early years of the twentieth century, the leadership of newly-established women’s colleges played a pivotal role in advancing the cause of women’s suffrage. At the Woman’s College of Baltimore, soon to be known as Goucher College, faculty took an active role in advocating for women’s suffrage and influenced students to join the movement. One of the leading suffragists among the faculty was Lilian Welsh.

Born in Pennsylvania, Welsh attended the Woman’s Medical College of Pennsylvania, where she earned her M.D. in 1889, and the University of Zurich, in Switzerland, where she continued her medical training. In 1894, she came to Baltimore and joined the faculty of the Woman’s College of Baltimore as professor of Physiology and Hygiene. Outside of the college, Welsh became involved in the numerous public health initiatives of Progressive Era Baltimore, as a member of the Maryland State Tuberculosis Commission and the Maryland Society of Social Hygiene. She also served on the board and provided medical care for working class women at the Evening Dispensary for Working Women and Girls of Baltimore City. Welsh’s involvement in public health issues and medical care for the poor provided her with insight into problems that government actions could alleviate. However, her ability to influence government policy, she came to realize, was limited by her lack of access to the ballot.

In her memoir, Welsh admitted that “when I came to Baltimore, I was a suffragist, but I had never lifted a finger nor contributed time nor money to advance the suffrage cause.” However, her medical work among the poor in Baltimore gradually convinced her “that the ballot was a very important tool in securing social legislation. . . .It was clear to me after appearing before committees of the legislature that a request to legislators would have much greater force when we could say ‘thousands of voters stand behind this request,’ instead of ‘thousands of women desire such legislation.’”

Welsh’s active involvement with the women’s suffrage movement began with the NAWSA annual meeting, held at the Lyric Theater in Baltimore in February 1906. Welsh worked closely with prominent Baltimore philanthropist, Mary Elizabeth Garrett and Bryn Mawr College president, M. Carey Thomas, to make arrangements for this convention aimed at raising funds to sustain the suffrage movement as well as engaging college women to assume more active leadership roles. She organized a group of Woman’s College students to act as ushers, garbed in cap and gown, for an evening devoted to college women. Suffrage leaders from around the country gathered in Baltimore to attend a week-long convention that was later seen as a turning point in the suffrage movement.

Welsh long remembered the convention and the suffrage luminaries who attended. In her memoir, she described an especially poignant encounter between the aging and ailing Susan B. Anthony, who would make her final public appearance at the convention, and the Woman’s College students who had been invited to tea at Mary Elizabeth Garrett’s elegant Mount Vernon home:
“The college women of Baltimore. . . will recall . . .when Miss Garrett invited them to come in for a cup of tea and a personal word from Miss Anthony. There we literally sat at her feet and knew we were in the presence of a great soul. . . . I shall never forget the picture she presented in the fading light of the afternoon and the fitful play of the flames of an open fire. She wore her famous garnet-colored velvet dress and lace collar. We, a small group, sat on the floor and listened to the few words she had to say. What they were I do not recall, but what I carried away with me was an impression of a woman characterized by great simplicity, strength and dignity, indomitable spirit and infinite patience.”

Following the 1906 NAWSA convention, Welsh became a vigorous advocate for women’s suffrage, both in her classroom and outside on the streets of Baltimore and Washington, D.C. “The greatest thrills of the campaign came with the street parades,” she recalled. “I marched in one in Baltimore and in the famous one staged in Washington the day before the first inauguration of President Wilson.” In 1916, she organized a suffrage rally to form the Goucher chapter of the National College Equal Suffrage League, for which she served as faculty advisor.

In her suffrage activism and in her teaching, Lilian Welsh helped advance the cause of women’s suffrage and inspired hundreds of Goucher students to join the ranks of suffrage supporters. As one alumna wrote of Welsh at her death, “She is worthy to be ranked with Anna Howard Shaw, Elizabeth Cady Stanton, and with other great names of the woman movement.”