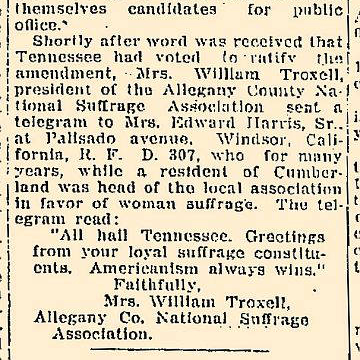 As president of the Just Government League of Allegany County in rural Western Maryland, Mrs. Edward Harris led the organization at a critical time, through two of the most seminal moments in Maryland’s suffrage history. Her activism is well-documented, but in typical fashion for the time, she is always referred to as either Mrs. Edward Harris or Mrs. Edward H. Harris, Sr., and never credited under her own name, which was possibly Ellen. Under any name, she deserves her due as one of Maryland’s leading suffragists.

As president of the Just Government League of Allegany County, Mrs. Edward Harris led the organization at a critical time, through two of the most seminal moments in Maryland’s suffrage history.

Her activism is well-documented, but in typical fashion for the time, she is always referred to as either Mrs. Edward Harris or Mrs. Edward H. Harris, Sr., and never credited under her own name, which was possibly Ellen. Thus, not much is known about her origin story beyond what can be identified in the context of her husband. She was born in New Jersey, as was her husband, in about 1851. The Harris’ married in 1878, had 4 children, and by 1910, had moved to Cumberland, Maryland.

The Allegany County Just Government League was established in March 1911 in Cumberland, at a large meeting of “persons favoring votes for women”. Harris became president of the League in 1914, after the first president, Florence McKaig, resigned due to ill health. Almost immediately, Harris turned her attention to the national campaign being planned by the Congressional Union, the precursor to Alice Paul’s National Women’s Party. The strategy was to target principal resort regions of the United States during the summer holiday season. A funding plea in the Congressional Union newsletter urges: “There are halls to be rented, literature to be printed, and traveling expenses of speakers and organizers to be paid. … Let us join hands in making it possible to carry this campaign from the Atlantic to the Pacific and from Canada to Mexico so that there will be no place in the country this summer, where the cause of suffrage will not be preached.”

In Maryland, the holiday campaign was coordinated by the state and local branches of the Just Government League, and focused on Allegany and Garrett counties. The tour began in Frostburg in June, and Harris met the delegation coming from Baltimore at the train station. The Baltimore group included Lola Trax, Edna Latimer, and Miss Mary Brennan, from whom we have the following account:

After giving the bugle call to announce the start of the open-air meeting, “… all Frostburg seemed to be gathered together at our corner within five minutes. There was a steady audience of 500 or more, a generous collection was taken, fifty papers sold, and 31 members secured.”

Brennan continues: “The meeting at Lonaconing was the first open-air meeting in the town’s history. The meeting in this little coal-mining town, 1,200 feet above Cumberland, was a great success,” with 23 new members signing on.

In Cumberland, Harris presided over the meeting in the city hall auditorium, which was reported as receiving an enthusiastic reception. The auditorium was filled with representative women of the city and a sprinkling of male supporters. Fifty new members were signed up. Concluded Miss Brennan: “The Cumberland spirit is as wonderful as its clear mountain air.”

The following year, Congressman David Lewis of the 6th district was the recipient of a targeted campaign of persuasion. The Baltimore Sun reported that Lewis had received at least two meeting requests by letter, but that there was “considerable doubt as to whether he wants to dodge them.” The Congressman finally acquiesced, and a meeting was scheduled for July 2, 1915 in his Cumberland office.

Again, a small group from the state branch of the Congressional Union and Just Government League traveled from Baltimore to join the Allegany County suffragists. The delegation met at the Windsor Hotel and held an open air meeting before heading to the congressman’s office. Forty women wearing purple, white, and gold regalia and carrying flags marched down Baltimore Street. Lewis ushered the women into his office and according to the Congressional Union newsletter, “seated himself with an exhausted air and remained seated throughout the proceedings.” The fact that he remained seated was also noted in The Baltimore Sun and local papers.

Harris began the interview: “Mr. Lewis, we are anxious to know why you voted against the Susan B. Anthony Amendment in the last congress. … From the platform at one of our meetings, you openly declared yourself for woman suffrage.” She concluded with a direct appeal for his support in the next session. Lewis, described as a Maryland progressive in the press, who gave multiple speeches in favor of the federal government taking over telegraph and telephone services, replied: “There are several reasons why the states, particularly in the southern states, should not be forced to enfranchise women through fed legislation. If the constitution should be amended to give the vote in such a wholesale manner, 45,000 negro women would be given the ballot in MD, a condition wholly intolerable.”

Edna Latimer from Baltimore shot back: “But Mr. Lewis, should the 365,000 women of Maryland go without the vote because there are 45,000 Negro residents of the state?” The issue was discussed “exhaustively,” and the suffragists were hopeful. Support was so strong in Lewis’ district, that it was thought he could be persuaded to vote for the Amendment and represent his constituency appropriately.

The headline in The Baltimore Sun the following day announced the result of their efforts: “Lewis Refuses Women: Congressman Declares Opposition to Suffrage Measure – Question State Issue, He Says.”

The women were undeterred. That summer, the Allegany County League switched gears and threw a garden party in Cumberland. There was dancing, an “oriental palmist,” an ice cream booth, and 10-minute speeches on the topic, “Why Should Not Women Vote?

In addition to her leadership with the Allegany County League, Harris also served as president of the local branch of the Maryland SPCA, and vice president of the Cumberland Civic Club, which elected her delegate to the State Federation of Women’s Clubs.

According to the Cumberland Evening Times, in 1920, immediately afterword was received about the ratification of the 19th Amendment, Mrs. William Troxell, the current president of the local League sent a telegram to Harris in Windsor, California. The article states that Harris had been head of the local association in favor of woman suffrage for many years, while a resident of Cumberland. It provides the telegram text verbatim: “All hail Tennessee. Greetings from your loyal suffrage constituents. Americanism always wins.”

Whether Harris had moved to California or was visiting is unknown, as is the date of and details about her death. What is clear, however, is that Mrs. Edward H. Harris Sr. played a key role in moving the suffrage movement forward in Allegany County.

SUFFS OF CITY ARE JUBILANT PLANS UNDER DISCUSSION FOR DEMONSTRATION OVER RATIFICATION OF SUFFRAGE AMENDMENT. Women of City Will Vote In November—Telegram Sent to Former President. 1920.