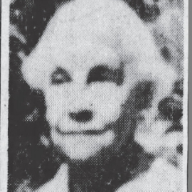 This episode of Ballot and Beyond, contributed by the Maryland Women’s Heritage Center, was written by Ida Jones, Ph.D, University Archivist, at Morgan State University in Baltimore. Dr. Jones is the reader.

Margaret Briggs Gregory Hawkins and her active West Baltimore social and civil contemporaries were engaged in social justice and sought to secure the franchise for African American women along with other women for the purpose of reaping the full benefits of citizenship, community improvement, and having a voice in the public square. Her far-reaching active memberships include the Druid Hill Branch of the YWCA, Maryland Training School for Colored Girls, Maryland Training School Board, Civilian Defense Mobilization, DuBois Circle, Progressive Women’s Suffrage Club…and allowed for frivolity and was a member of the Fortnightly Whist Club and a sewing club.

Margaret was a neighbor to fellow suffragist, Augusta Chissell, also featured on the Ballot & Beyond podcast. Ballot & Beyond is powered by Preservation Maryland with support from the Maryland Historical Trust and Gallagher, Evelius & Jones.

Margaret Briggs Gregory Hawkins was born on August 5, 1877, the only daughter of Professor James M. Gregory and Fannie Emma Whiting Hagan. Margaret was born in Williamsport, Pennsylvania. She was the third child of James and Fannie. Her brothers were Eugene Monroe, James Francis, and Thomas Montgomery. Her childhood home, aspirations of her parents, and their dedication to social justice infused Margaret with a birthright calling to disrupt injustice through education. Her father’s influence charted a course in education for Margaret’s life and provided her with her first teaching job.

James was born on January 23, 1849, in Lexington, Virginia to free-born African Americans. He enrolled at Howard University. The Gregory family grew deep roots at Howard University. Margaret graduated from the preparatory department of Howard University, St. Augustine College Raleigh, NC, and Boston University where she majored in history. After graduation, she entered the field of education and for two years taught high school at the Bordentown School (officially titled the Manual Training and Industrial School for Colored Youth, the State of New Jersey Manual Training School and Manual Training and Industrial School for Youth). Her father served as the principal of the Bordentown School during Margaret’s two-year stint. She taught a variety of subjects including English, Grammar, Rhetoric, English Literature, and Modern Languages. She also provided instruction for students in Latin and German. She arrived in Baltimore around 1900. She joined the faculty at Frederick Douglass high school, Baltimore’s only public high school for Black children. Her principal subject area was American history. While teaching at Douglass she met her future husband Mason A. Hawkins. Hawkins was the principal of Douglass high school.

Margaret married Mason A. Hawkins in Bordentown, NJ in 1905. Their union produced two sons who both served in WWII. Gregory and Mason A. Jr. both were sent to Fort Meade together for induction in preparing for WWII.

Margaret’s civic engagement expanded in Baltimore. She involved herself in a number of activities and organizations. She served on the Board of Managers of the Druid Hill Branch of the YWCA and as a member of the Central Branch. She was the first African American woman to serve on the Central Branch YWCA executive committee of the Board of Directors.  In 1933 she was appointed to the Board of Managers of the Maryland Training School for Colored Girls,  which merged with the majority white Montrose School for Girls.  The Maryland Training School provided housing and instruction for girls designated as orphans, delinquent, abandoned or wayward, and for whom the state claimed responsibility. The girls were minors and therefore could not provide for themselves and were seemingly without families or community agencies to attend to their needs.  Maryland Governor Albert T. Ritchie appointed Margaret to a six-year term on the Maryland Training School Board. In 1939 after a successful term she received another six-year appointment to the Maryland Training School Board.

She was also a member of the steering committee and women’s division of the Civilian Defense Mobilization during World War II.

She was a founding member and served as the first president of the DuBois Circle in 1906.  This intimate group of like-minded women sought to raise consciousness about the potential and opportunities African Americans were seizing through educational, legal, and economic agency.  Margaret also allowed for frivolity and was a member of the Fortnightly Whist Club and a sewing club.

She served as the vice president of the Progressive Women’s Suffrage Club. Her suffrage activities would include the 1909 effort by African American women to ensure the retention of the 15th Amendment, which provided voting rights for African American men, but was threatened in Maryland.. The Baltimore Advocate reported that “[i]n Maryland an amendment is pending to disfranchise colored men. If the colored men of the state organize and educate each other, the amendment will be killed and its advocates will hardly venture to make it an issue in this state again. Its death and burial will hasten the death of Jim Crow and disfranchising laws.”  The women were successful in galvanizing the men to vote, register, and retain the franchise.

As for African American women, the crusading civil rights advocates were clear on the necessity of the ballot. The franchise for women echoed throughout the state, literature, and consciousness of the community. Margaret and contemporaries were engaged in social justice and sought to secure the franchise for African American women along with other women for the purpose of reaping the full benefits of citizenship, community improvement, and having a voice in the public square. She lent her voice, organizational connections, and educational endeavors to the cause of social justice as modeled by her parents.

Margaret Briggs Gregory Hawkins died on April 8, 1969, in Baltimore at the McCulloh Street nursing home at age 91. Her funeral services were held at historic St. James Episcopal Church at Lafayette and Arlington avenues.