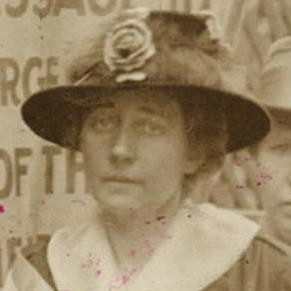 Mary Bartlett Dixon was a skilled nurse and active suffragist who was one of many arrested while silently protesting and demanding the vote for women in front of the White House in Washington, DC in 1917. As a nurse, Dixon was well-aware of the terrible conditions that imprisoned activists endured during the years of the Women’s Suffrage movement. Nevertheless, she persisted. Dixon’s persistent activism and engagement with the public through her writing helped shape the course of Maryland’s suffrage movement. After ratification, Dixon founded the Talbot County League of Women Voters and continued to engage with medical and charitable causes throughout her life.

Watch the video episode on Mary Bartlett Dixon and her work in the Women’s Suffrage Movement here:

This week on Ballot and Beyond, we’ll learn about Mary Bartlett Dixon, a skilled nurse and leading suffragist from Maryland Eastern Shore, read by Kacy Rohn, the primary researcher of Maryland’s historic context statement on the state’s suffrage legacy.

Maryland’s suffrage movement drew women from all corners of the state. Mary Bartlett Dixon, of Easton, was a leader in the suffrage movement and in her chosen field of nursing. Dixon graduated with the 1903 class of the John Hopkins School of Nursing. She quickly made an impact in medicine, helping to establish the Emergency Hospital of Easton in 1906, an institution today known as the University of Maryland Shore Medical Center at Easton.

Dixon connected nursing with advocacy for women’s voting rights, writing a letter to the editor of the American Journal of Nursing in 1908 that criticized the journal’s neutrality on women’s suffrage. She was a leader in the Talbot County chapter of the Just Government League (JGL), one of Maryland’s largest and most active suffrage organizations; wrote regularly for the Maryland Suffrage News, a JGL publication; and edited a regular column for The Baltimore Sun entitled “What the Suffragists Are Doing.”

In 1913, Dixon was one of just a handful of women who met with President Woodrow Wilson shortly after his inauguration to ask him to support a constitutional amendment enfranchising women, which he chose not to do. When he was re-elected in 1916, suffragists took their fight to his doorstep. In January of 1917, the National Woman’s Party began a daily picket of the White House, holding banners with messages such as, “Mr. President How Long Must Women Wait for Their Liberty?” These ‘Silent Sentinels’ were the first people to ever picket the White House, and they pioneered an enduring form of political activism.

Mary Bartlett Dixon defended the Silent Sentinels in the face of widespread public condemnation. She wrote to the Baltimore Sun on January 24, 1917, that:

“[The] silent sentinels are not annoying the President… He realizes they are gentle reminders of his inconsistency… It is unthinkable that President Wilson can proclaim to the world… his belief in the American principle of ‘equal rights for all’ and continue to exclude, in his great leadership, ‘equal rights’ for all the women of the United States.”

The pickets became even more unpopular when the US entered World War I in April of 1917, after which their actions were seen as treasonous as well as simply distasteful. In the summer of 1917, police began arresting and imprisoning these political protestors. Maryland women, who were in such close proximity, played a key role in these demonstrations. Mary Bartlett Dixon joined the White House pickets and was arrested with 40 other women on November 10, 1917.

Several Marylanders were imprisoned in the Occoquan Workhouse, where guards subjected the suffragists to brutal physical treatment and extended solitary confinement. When the women were denied status as political prisoners they went on hunger strike and some were eventually violently force-fed.

This widely publicized abuse helped shift public opinion in the suffragists’ favor. In January of 1918, President Wilson finally felt sufficiently pressured to declare his support for a federal women’s suffrage amendment, beginning the process that would lead to ratification of the 19th Amendment in 1920.

Dixon’s persistent activism and engagement with the public through her writing helped shape the course of Maryland’s suffrage movement. After ratification, she founded the Talbot County League of Women Voters and continued to engage with medical and charitable causes throughout her life.

Mary Bartlett Dixon in her Class of 1903 at the Johns Hopkins Hospital School of Nursing. Photo from John Hopkins.

Mary Bartlett Dixon, third from left, in a picket line in Washington, DC, 1917. Photo from Library of Congress.

Maryland Bartlett Dixon in a float in Talbot County. Photo from the Easton Star Democrat.