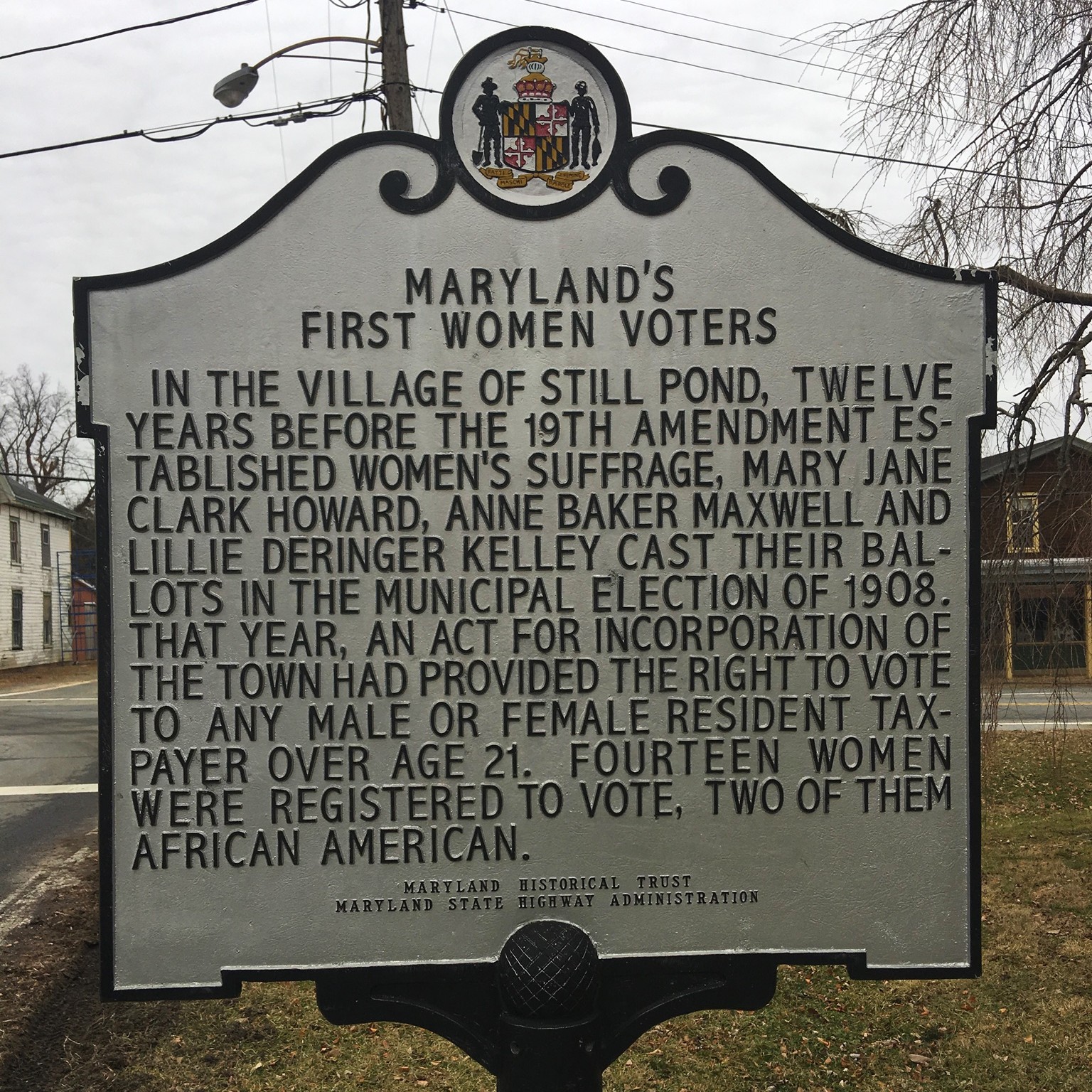 On Maryland’s Eastern Shore, the farming village of Still Pond wrote in its charter a guarantee that women taxpayers had the right to vote in all municipal elections. In 1908, 14 women registered including 2 African American women. 3 of the women along with 72 men showed up to vote on election day. Those three women who went down in history as Maryland’s first women to vote are: Anna Baker Maxwell, Eliza Lily Deringer Kelly & Mary Jane Clark Howard.

This week on Ballot and Beyond, we’ll learn about Anna Baker Maxwell, Eliza Lily Deringer Kelly, and Mary Jane Clark Howard, three women who voted in 1908 in Still Pond, Maryland, read by, Meagan Baco, Director of Communications at Preservation Maryland.

On election day in 1908, 12 years before the passage of the 19th Amendment, three women showed up at the polls in the village of Still Pond, Maryland. On Maryland’s Eastern Shore and about 60 miles across the Chesapeake Bay from Maryland state capital in Annapolis, the farming village of Still Pond wrote in its charter a guarantee that women taxpayers had the right to vote in all municipal elections. In 1908, 14 women registered including 2 African American women. 3 of the women along with 72 men showed up to vote on election day.

The three women were Mary Jane Clark Howard, 69-year-old farmer’s widow for 24 years and a mother of 10. She told a reporter that she felt very foolish voting but wanted to see what she had been missing. And Anna Baker Maxwell and Eliza Lily Derringer Kelly were prominent members of the community. Eliza Lily Derringer Kelly was also the granddaughter of Henry Derringer, the Philadelphia gunsmith who invented the pocket-sized pistol.

And what of the 11 registered women who stayed home? The local news reported that some were deterred by a downpour that day, others by household chores and cooking, and one by a fussy baby. A post-election editorial by the Baltimore Sun did not commend the three female voters who showed up that day but instead flattered the women who stayed home. It read, “The women, most of them, have something far more important to occupy their time than politics. Men can attend to the voting, but they cannot attend to the baby and other duties which require the greater ability of women.”

It would take another 12 years before the country would push past such exclusionary traditional thinking and ratify the 19th Amendment. Voters Mary Jane Clark Howard and Eliza Lily Derringer Kelly did not live to see their state and their nation take that step forward, but in their community of Still Pond, Maryland their votes counted.

Francis Ellen Watkins Harper | Fighting for the Rights of All