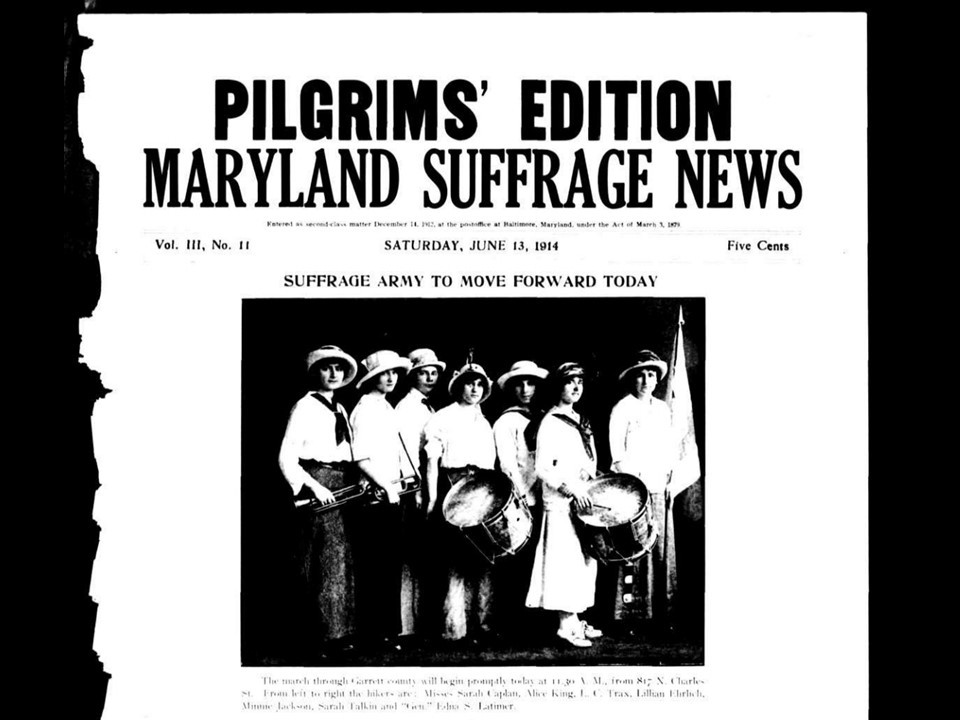 Lola Carson Trax and Edna Story Latimer led a press-winning hike of a dozen suffragists across Western Maryland in 1914. The noteworthy nature of a dozen women walking alone for two-weeks through Westernday was a noteworthy occurrence and fed the goal held by many suffragists to keep the fight in the public eye. Along their way, Trax and Latimer spoke to the press and the public, gathered signatures and new members for the Just Government League – their actions and publicity have gone down in history.

This week on Ballot and Beyond, we’ll learn about Lola Carson Trax and Edna Story Latimer, Maryland suffragists that led a protest hike across Western Maryland in 1941, read by Kacy Rohn, the primary researcher of Maryland’s historic context statement on the state’s suffrage legacy.

Politicking has evolved in many ways in the hundred years since the women’s suffrage movement, but some things haven’t changed. Suffragists knew that they had to keep the public’s attention in order to be able to make their case.

Beginning in the 1910s, women increasingly began to use their physicality to draw media attention, holding swimming competitions, mountaineering, and planning suffrage pilgrimages or hikes. Suffragists on a pilgrimage would walk or hike a route that would allow them to stop and speak in many small towns. The spectacle of a troupe of women marching into town was enough to draw a curious crowd. Organizers knew that this was a successful way to get media coverage and talk directly with people in more rural communities that they would otherwise never reach.

In Maryland, Just Government League (JGL) organizers Lola Carson Trax and Edna Story Latimer began to plan a series of these pilgrimages around the state. Trax was an experienced organizer who came from a labor organizing background with the Women’s Trade Union League and the Wage Earners’ Suffrage League, which had formed to address the lack of working-class representation in establishment suffrage organizations.

In June of 1914, Trax and Latimer led a group of JGL activists on a two-week hiking campaign through Garrett County. Their route began in Cumberland and included stops in Grantsville, Friendsville, Oakland, Bloomington, and many communities in between. More than mere publicity stunts, hikes were carefully planned to recruit new supporters. Trax explained in Maryland Suffrage News that as the hikers drew curious audiences each woman would be assigned a role: two to hand out literature, two to hand out membership cards, and everyone to speak in turn. This strategy proved a huge success – the Garrett County hike earned the Just Government League over 800 new members.

This experience had quite an impact on the suffragists as well. Weeks spent hiking in the mountains was a major departure from the day-to-day lives of women who were chiefly office-workers or homemakers. Latimer believed that “the fascination of being out under the blue sky, to hear the birds singing, to see the beauty of nature and the feeling of fellowship that exists among us all,” were enormous benefits for women who had never spent much time in outdoor pursuits.

Pilgrimages and hikes were a key part of Maryland’s suffrage campaign, but they present a challenge to traditional preservation strategies. Because of the mobile nature of this activist movement, there are many intangible histories associated with the suffragists’ work. How can preservationists best help document these fleeting places and tell the story of this activism?

Portrait of Lola Carson Trax, organizers for the Just Government League, 1915. Photo from Library of Congress.

Edna Story Latimer, President of the First District of the Just Government League of Maryland. Trax and Latimer were successful political organizers later sent to western states to campaign against anti-suffrage candidates in Congressional and Presidential elections. Photo from the Library of Congress, 1916.

The Just Government League publication The Maryland Suffrage News carried full coverage of the Garrett County pilgrimage in their June 13, 1914 edition. From the Library of Congress.