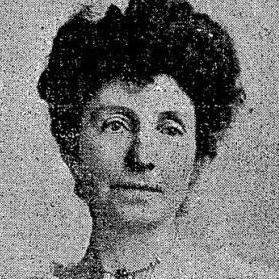 This week on Ballot and Beyond, we’ll learn about the fearless leader of the Maryland Woman Suffrage Association, Emma Maddox Funck, read by Kacy Rohn, the primary researcher of Maryland’s historic context statement on the state’s suffrage legacy.

The MWSA moved forward cautiously. Wary of provoking opposition, they focused on organizing their members and educating the public. They considered but ultimately decided against a letter-writing or petitioning campaign, and rejected encouragement from national leaders to contest their legal right to vote in court.

In 1904, the MWSA elected a new President: Emma Maddox Funck, who had led the Baltimore City Suffrage Club since 1898. Funck was a Baltimore native and graduate of Eastern High School. Prior to committing herself to the suffrage movement, she earned a reputation as a talented musician who performed as a concert and choir singer. She described herself as a lifelong supporter of equal rights who had been transformed into a suffrage activist during two years spent in homebound convalescence. She passed the time by reading suffrage literature, and when she emerged she immediately sought out other Baltimore women engaged in the movement.

One of her major achievements as MWSA President was successfully lobbying the National American Woman Suffrage Association (NAWSA) to bring their 1906 annual national convention to Maryland. The Lyric Theater in Baltimore hosted the NAWSA convention from February 7 – 13, 1906. The gathering convened thousands of suffragists from across the country for a program of speeches, prayer services, musical performances, and club meetings. Attendees witnessed an important milestone: the transition in leadership from the movement’s founders to the next generation. Susan B. Anthony, who was elderly and in poor health, used her remarks to urge the assembled young women to carry on the movement. She passed away just a month later.

The NAWSA convention was a pivotal moment that spurred new leaders and new groups to emerge. Not all of these new leaders agreed with MWSA’s conservative approach, but Funck continued to pursue patient persuasion and attempts to bring statewide suffrage legislation before the Maryland General Assembly. These measures were universally rejected by the state legislature.

Funck led the Maryland Woman Suffrage Association through the passage of the 19thAmendment. After 1920, her political engagement continued as she advocated for women’s rights and made two unsuccessful attempts to run for office. Funck’s legacy lies in her stewardship of the Maryland Woman Suffrage Association through the critical years of the early 20th century, which brought thousands of Maryland women into political and civic life for the first time.