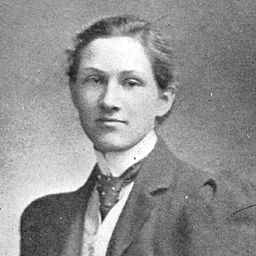 This episode of Ballot and Beyond, contributed by the Maryland Women’s Heritage Center, was written by Diane E. Weaver, Ph.D. The reader is Diane Weaver.

Edith Houghton Hooker was a critically important and arguably an essential figure in the Maryland campaign for women’s suffrage. Without her drive and dynamism, we would have little awareness of the commitment of Maryland suffragists to achieve the right to vote.

Edith Houghton Hooker was a critically important and arguably an essential figure in the Maryland campaign for women’s suffrage. Without her drive and dynamism, we would have little awareness of the commitment of Maryland suffragists to achieve the right to vote.

Edith Houghton graduated from Bryn Mawr College and enrolled in the Johns Hopkins University Medical School, one of the first women accepted in that program. Following her marriage to Dr. Donald Hooker, and a year of study in Berlin, she returned to Baltimore and began a career in social work.

Edith Houghton Hooker became convinced that progressive reform would occur quickly and more completely if women achieved the right to vote. Maryland’s suffrage movement was experiencing a renaissance, and in 1909 Hooker organized the Just Government League (JGL) and affiliated it with the National American Woman Suffrage Association (NAWSA).

The defeat of a suffrage bill in the 1910 legislative session led Hooker and others to believe that the answer lay in passage of a national constitutional amendment. In the meantime, Hooker and others continued to press the General Assembly for suffrage legislation.

Hooker’s 1912 creation of the Maryland Suffrage News as the official organ of the Just Government League addressed the needs of suffrage organizational unity, a statewide network, and public information. Since general circulation newspapers paid scant attention to suffrage, the News became the weekly voice for the Maryland suffrage movement.

Hooker also took to the streets, using her Packard automobile from which she conducted open-air meetings in various locations throughout the state.

With a multitude of parlor and open-air meetings, as well as distribution of more than 100,000 pieces of suffrage literature, by 1915 the JGL had 17,000 members. In 1917, the National Woman’s Party asked her to serve as editor of The Suffragist, the official publication of the Party.

On December 14, 1912, Hooker wrote in the News: “Nearly every suffragist is also active in some form of social work; not a few have come to their desire for the ballot through their civic duties…Therefore, as a matter of efficiency…suffragists are saying: “Let us get power first.” She continued, “What we are really after is the power which accrues to the most insignificant male at the age of twenty-one…Their opinions count just because they can vote. We do not want merely to cast ballots. We want to cast our influence.”

Although the Maryland Senate passed a suffrage bill in 1916, the House of Delegates continued to defeat the measure.

After the U.S. Congress passed the Nineteenth Amendment in June 1919 and sent it to the states for ratification, Hooker, now president of the Maryland Suffrage Party of Baltimore, led an intensive ratification campaign.

She and other suffrage leaders met with Maryland’s new Governor, Albert C. Ritchie, in February 1920. They also presented to the General Assembly a petition signed by more than 125,000 people.

Edith Houghton Hooker died on October 23, 1948. She was inducted into the Maryland Women’s Hall of Fame in 1999.