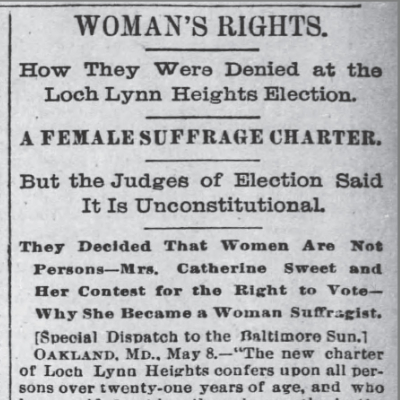 Catherine Sweet may have remained unknown to history if it were not for a front-page article published in The Sun of Baltimore, Maryland, on May 8, 1896. The article was about the first municipal election in the town of Loch Lynn Heights in Garrett County, Maryland. Catherine almost was the first woman to vote in a municipal election in the state, but in the end, that distinction was not to be hers.

Watch the video episode on Catherine Sweet and her work in the Women’s Suffrage Movement here:

Catherine Sweet may have remained unknown to history if it were not for a front-page article published in The Sun of Baltimore, Maryland, on May 8, 1896. The article was about the first municipal election in the town of Loch Lynn Heights in Garrett County, Maryland. Catherine almost was the first woman to vote in a municipal election in the state, but in the end, that distinction was not to be hers.

Born and raised in Alliance, Ohio, circa 1850, Catherine married young and soon became a mother. Not long after the birth of her child, her husband died, and she found herself to be a young widow. In the article in The Sun, she is quoted as having said, “I had to go into the Probate Court in settling the estate. That made a woman suffragist of me, and I have been devoted to the cause ever since. I found in Probate Court how small and insignificant a woman is in the eye of the law.” Catherine became embroiled in a fight with her husband’s family to secure her husband’s property and her child’s custody and was appointed a male guardian to state her case, but she eventually prevailed.

Catherine then moved to Garrett County in westernmost Maryland and re-married into the Sweet Family. Her second husband’s first name is unknown, but he was the brother of William W. Sweet, who was a large property owner and the preparer of the Loch Lynn Heights Town Charter, which incorporated the town in April 1896. The movement for a charter had been challenged by the more conservative political group, but a charter was quickly prepared, approved by the State Legislature, and adopted by the town executive rather quietly and to the dismay of the opposition. That discourse set up an even greater challenge to be dealt with in the newly incorporated town’s first election.

The incorporation documents state that “all persons over twenty-one years of age, and who have resided within said corporate limits for the period of six months preceding any election of officers for this corporation shall be entitled to vote at such election.” Catherine had encouraged her brother-in-law to add the words “male or female” after “all persons” in the document, but he feared it would raise further objection to the incorporation of the town, so the words were not added. This, says The Sun article, was “mistake number one” in the story that brings Catherine Sweet to fame’s attention.

At the time the town was incorporated, there were 50 male voters and 43 women over the age of twenty-one. The less conservative political group in the town supported woman suffrage and wanted the women to be able to vote on election day, but the more conservative group, who had opposed the Town Charter and were set on taking control of the Town’s governance by winning the election, did not support woman suffrage. The article in The Sun says that “mistake number two” was made in the selection of election judges, a mistake the article calls a crime. The provisional council named in the charter were all women suffragists and had the responsibility to select the election judges. For unknown reasons, they selected judges that were sympathetic with the more conservative mayoral candidate including his father.

According to The Sun article, on election day, Catherine and her group of women suffragists went to the Loch Lynn Heights election house to cast their vote. The group was not as large as she had hoped for, as several women had been deliberately detained at home or required to tend the store. Their husbands intentionally planned to defeat the right of women to vote.

As quoted in the article, Catherine asked one of these men why he objected to his wife voting. “Because,” he is reported to have replied, “women cannot hold office.” “Yes,” Catherine responded, “you want to inflict two wrongs instead of one.”

But, Catherine and six other women marched to the polls, where the election judges denied the women. They did not get to cast their votes. Catherine was denied more than that…she did not get the distinction of being the first woman in Maryland to cast a vote at a municipal election. And the conservative, anti-suffrage candidate won the election. The article quotes Councilman Warren Rathburn, a son of the mayor, as having said, “If those women had gotten in their votes,” we would have been beaten as sure as thunder.”

Catherine was described as a well-spoken and intelligent woman, and she used her speaking abilities to let The Sun reporter know of her anger. He quotes her as saying,

Catherine Sweet is not listed in the 1900 U.S. Census for Garrett County, and where she moved, and where and when she died, are unknown.

In the case of the first Loch Lynn Heights election in 1896, which could have been a watershed moment in the fight for women’s suffrage in the State of Maryland, the decision to deny the vote to Catherine Sweet and her associates was mostly about men in the community being unwilling to share power and wanting to continue to promote their views on how the town should be run. Catherine knew this, and at the time, in a rural, conservative, small town in Western Maryland, it looks like she did the only thing left in her power to protest…she spoke to the press and then decided to leave.