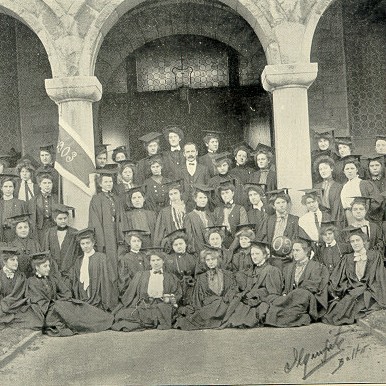 This episode of Ballot and Beyond, contributed by the Maryland Women’s Heritage Center, was written by Tina Sheller, assistant professor of Visual and Material Culture at Goucher College. The reader is Tina Sheller.

Emilie Doetsch was a suffragist, lawyer, journalist, and political activist, who participated in the famous Suffrage Army march from New York to Washington, D.C. in February 1913.

Emilie Doetsch was a suffragist, lawyer, journalist, and political activist, who participated in the famous Suffrage Army march from New York to Washington, D.C. in February 1913 as a “war correspondent” for a Baltimore newspaper.

She was born in Baltimore in 1882 to Johanna (Pohl) Doetsch and Louis John Doetsch, a well-known German-American lithographer. Emilie attended the Woman’s College of Baltimore, later known as Goucher College, from 1899-1903. Following her graduation from the Woman’s College, Emilie pursued legal studies at the University of Maryland School of Law. She graduated from law school in 1906, and in 1907, became only the second woman admitted to the Maryland State bar.

Due to the lack of opportunities for women in the legal profession in the early twentieth century, Emilie was unable to find work as a lawyer. As a result, she decided to take advantage of her college journalism experience and found a job as a reporter for the Baltimore News. In February 1913, she joined the Suffrage Army march from New York to Washington, D.C. as a “war correspondent.” She filed daily reports for the Baltimore News of the progress of the Suffrage Army as its soldiers battled the bitter winter cold weather on its 230-mile hike to the nation’s capital. Intent on bringing the cause of women’s suffrage to the nation’s attention on the eve of the inauguration of President Woodrow Wilson, the small, but proud army of women, accompanied by Emilie Doetsch, marched triumphantly into Washington on the last day of February. Emilie evoked both the glory and the chaos of the street parade in her February 28th dispatch:

“General Rosalee Jones headed the hikers, and was flanked by Bugler Wend and Colonel Lemon. Following were the faithful army stretched across the street in a parallel line, their hiking sticks interlaced in their hands and their faces smiling and happy. They had not the appearance of a spick-and-span brigade for their garb gave mute testimony to the hardships they had endured. That they were known individually was apparent, and the name of each member was caught up by the thousands of thousands, and the cry of ‘votes for women’ helped to swell the tumult.

Incoming Presidents have not received more clamorous applause than did the company of brown-clad women huddled in a little group forced to fight their way through veritable walls of shouting humanity for more than a mile of their historic hike.

To prevent disruption of their column in the demonstration, General Rosalie Jones and her tired comrades locked arms and in two lines clung together, moving only when police could clear the way for a short advance. In every block, they were halted repeatedly, the crowds greeting them everywhere with tempestuous demonstration. Men and women alike braved the horses hoofs and chugging automobiles of the suffrage army escort to grasp the hands of the suffrage pilgrims.”

Devoted to the cause of gender equality throughout her life, Emilie was remembered by her Goucher College classmates as a gentle warrior for women’s rights. Following her death in June, 1969, her classmates paid tribute to her understated but persuasive manner. They wrote in the Goucher Alumnae Quarterly: “We never thought of her as a militant suffragist, for she was a good listener…For she made converts; her reasonableness, so quiet and friendly, made friends who became converts.”