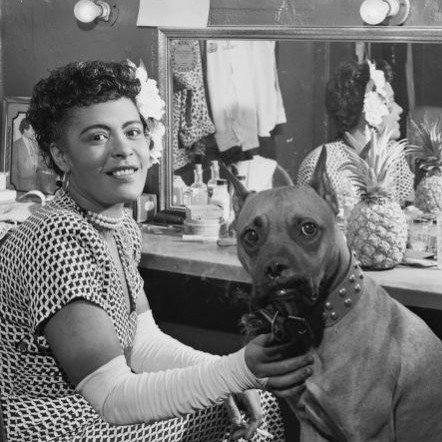 In just a short lifetime, Baltimore-raised Holiday became one of the nation’s most famous African American jazz musicians. In 1938, she joined Artie Shaw’s Orchestra, forming one of America’s first racially integrated bands. Her talent helped her break the segregation rules of Jim Crow, as she enjoyed access to some of the best labels, orchestras, and song choices throughout America and Europe.

Born Eleanora Fagan in 1915, in Philadelphia, Billie Holiday grew up in the Fells Point area of Baltimore, Maryland. She renamed herself Billie after an actress by the name of Billie Dove. Her last name Holiday was her father’s surname. Holiday grew up in East Baltimore with a life complicated by poverty and racism. Her mother later moved their family to New York City around 1927. Holiday lived through the Depression by working many low-paying cleaning jobs and listening to early African American artists, such as Louis Armstrong and Bessie Smith. With her early life shaped by hard work and great music, she found Harlem an exciting and stimulating place to work and express herself. John Hammond first discovered Holiday in 1933 while she was singing in Monette’s, a Harlem nightclub. In November of that same year, at just 18-years-old, she recorded her first commercial session with Benny Goodman’s band at Columbia Records.

Holiday remained in Harlem for a few more years before she returned to the studio in 1935. She was known for wearing her trademark gardenia in her hair, and was nicknamed “Lady Day” by Teddy Wilson orchestra member Lester Young. In 1938, she joined Artie Shaw’s Orchestra, forming one of America’s first racially integrated bands. However, many venues were uncomfortable with her unique musical style and declined their performance. Eventually, Holiday resigned from the band to join the integrated entertainers at the famous Café Society in New York City. It was there that she became famous for her performance of “Strange Fruit.” This well-known piece, written by Abel Meeropol, emotionally describes the brutality of public lynching in America. It became a civil rights protest song which risked Holiday’s career. Her performance not only marked a high point in her career, but it advanced her as a civil rights activist. She continued to fight against racial violence and for social equality throughout her lifetime.

With a flourishing career, Holiday wrote “God Bless the Child,” another masterpiece that sealed her destiny in the music industry throughout the 1940s and 50s. Her talent helped her break the segregation rules of Jim Crow, as she enjoyed access to some of the best labels, orchestras, and song choices throughout America and Europe. She also had two sold-out performances at Carnegie Hall in 1948. She released her autobiography in 1956, however, racism, sexism and her heroin addiction took their toll on her mental and physical health. And in 1959, she died at the early age of 44.

In just a short lifetime, Holiday became one of the nation’s most famous African American jazz musicians. And she has been honored in many ways since her death. Diana Ross portrayed Holiday in the award-winning biographical film “Lady Sings the Blues,” and she was awarded a posthumous Grammy Lifetime Achievement Award, a U.S. postage stamp, and inducted into the Rock-n-Roll Hall of Fame. The National Portrait Gallery honored her in its temporary exhibit, “Let Your Motto Be Resistance: African American Portraits.” And in her hometown of Baltimore, there is the Billie Holiday Vocal Competition; a statue of Holiday on Pennsylvania Avenue, where she sang in nightclubs like The Royal Theater; and a likeness of her at the National Great Blacks in Wax Museum. And even in 2020, during the “Black Lives Matter” movement, her song “Strange Fruit” lives on as a protest to racism and lynchings in America.