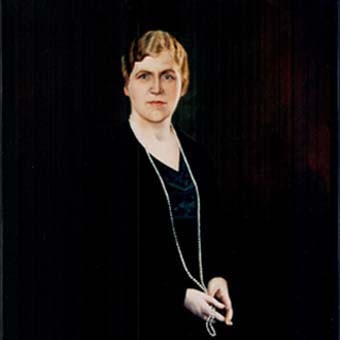 In 1922, just two years after the 19th amendment empowered women with the right to vote, Harford County citizens elected Jarrettsville resident Mary Eliza Watters Risteau to the Maryland House of Delegates.
Critics saw her campaign as scandalous. However, Risteau or “Miss Mary” to her Harford county neighbors and friends, became the first woman elected to the Maryland House of Delegates.

She was a groundbreaking career politician at a time when most women had few career choices.

Mary Risteau was born on April 4, 1890 near Towson. Her father was a sheriff and local auctioneer. After completing a course of study in Mathematics at Johns Hopkins University in 1917, she began her career as a Baltimore teacher.

She is still remembered for collecting $600 in pennies from students to purchase a portrait of Cecilius Calvert, 2nd Baron Baltimore, from its painter, Florence MacCubbin. The painting still hangs today in the Maryland House Chamber.

As a young woman, Risteau travelled frequently between Canada and the US and was said to have accumulated a wide circle of friends.

Between 1909 and 1917, several tragedies devastated her family and changed the direction of her life. First, her twin brother drowned near Towson. Then her father died of a long-time intestinal ailment. Another brother passed away just two weeks later.
Devastated, Risteau and her mother then moved to Harford County to take over Eden Manor, a 400-acre family farm near what is now Jarrettsville.

For the next four years, Risteau taught herself the hard work of farming and came to understand the science of agriculture and the unique faced by farming families. These years came to be a great influence when she went on to represent rural Harford County in Annapolis.

Risteau announced her run for the Maryland House of Delegates in August, 1921.

She clearly outlined her priorities:

“I want to go to the Legislature because I am interested in the problems of farmers’ wives. I have been a farmer for four years now, although when I first came to undertake the management of Eden Manor, my farm, the men at my old home said I would not stay a night. I expect to stay here many years and I want to see the rural schools in Harford brought up to the highest standard that can be attained in country schools. These two phases of the farmer’s life, the development of agricultural opportunities and educational advantages, will be my interests if I go to the legislature.”

Never described as a political firebrand, Risteau was instead regarded as plainly dressed, quiet and cautious. She had a reputation as knowledgeable about many subjects and deeply passionate about the art & science of farming, the well-being of teachers and children as well as the importance of fair government.

During the campaign, she spoke at graduations, farmers’ picnics, grange meetings and other community gatherings. After her speeches, campaign workers handed out pamphlets supporting her election.

Harford County solidly supported her. Her 1922 victory in the Maryland House of Delegates started her path to a long and visible political career. She was elected to the House of Delegates again in 1924, 1931 and 1933 and to the Senate, serving through 1937.

Her legislative agendas tended to focus on agricultural supports; a bill that granted women the right to serve in high public offices; education issues (including the Equalization Plan, which set a minimum teacher’s salary by subsidizing poorer counties); funding for public library expansion; consumer protections; support for the Chesapeake Bay and its fishing and oyster industries; and the establishment of the State Teachers College at Salisbury. She was influential in passing the bill that changed the name of the state’s Normal Schools to Teachers Colleges. Against some political pressure, she opposed Prohibition, believing that sound character showed in how someone talked and acted and that such laws would not change behavior.

Her legislative accomplishments proved to any doubters of the time that women have the ability to negotiate complex legislative issues.

In 1935, Risteau’s mother died. To ease her grief, she looked for a new endeavor and enrolled as a law student at the University of Baltimore. It had been her life-long dream and she received encouragement from one of her supporters, Governor Ritchie. She drove 60 miles to school, attended five nights a week and completed a three-year degree in two and one-half years.

In 1937, Ms. Risteau also briefly sought the nomination for the congressional seat from Maryland’s second district. She didn’t shrink from hardline campaigning, reminding potential voters that the incumbent, Street Baldwin, frequented Pimlico horse races and Florida betting rings instead of attending to his congressional duties.

She lost the election, but Harford County soon appointed her Clerk of the Circuit Court in Harford County. This position in downtown Bel Air, closer to home, allowed her to balance her farm duties with her professional career more easily. She played the organ and taught Sunday School at the Christ Episcopal Church in the Rock Spring parish in Forest Hill.

She lived out her days at the family’s farmhouse and Christ Episcopal Church parishioners stayed connected to her as she aged.

When talking with others about her life, she reminded them that she had, and lost, a twin brother and it greatly influenced her. She told a biographer that “I was born with equal rights. I had a twin brother.” Her brother had been interested in politics, so she may have entered politics as a way to honor him as well as her own interests and passions.

Mary Risteau died in 1978 and is buried in the William Watters Memorial Church cemetery in Jarrettsville.

Today, the Mary E. Risteau State Office Building in downtown Bel Air carries on the spirit of her legal, political and agriculture career and life in Harford. It is the home of the District Court and various state offices. Bel Air’s popular Farmers’ Market takes place in its parking lot each Saturday between April and December.

After retiring from government service, Mary Risteau returned to live in her home in Jarrettsville in Harford County. She remained active in her local community and church until her death. She is buried in the graveyard of the William Watters Memorial Methodist Church, one-half mile from her ancestral home. Photo from the Maryland Manual Collection, MSA SC 1198.

Mary E. W. Risteau is sworn in by Francis A. Michel, president of the House of Delegates, for the 1931 Session. In Under the Dome: The Maryland General Assembly in the 20th Century (Annapolis: Department of Legislative Services, 2001) 22.

Harford County solidly backed Mary Risteau when she ran for the Maryland House of Delegates just two years after the passage of the 19th Amendment. This 1935 photo is likely the basis for the James Warner painting of Ms. Risteau that now hangs in the ceremonial courtroom of the Harford County Courthouse. Photo courtesy of the Historical Society of Harford County.