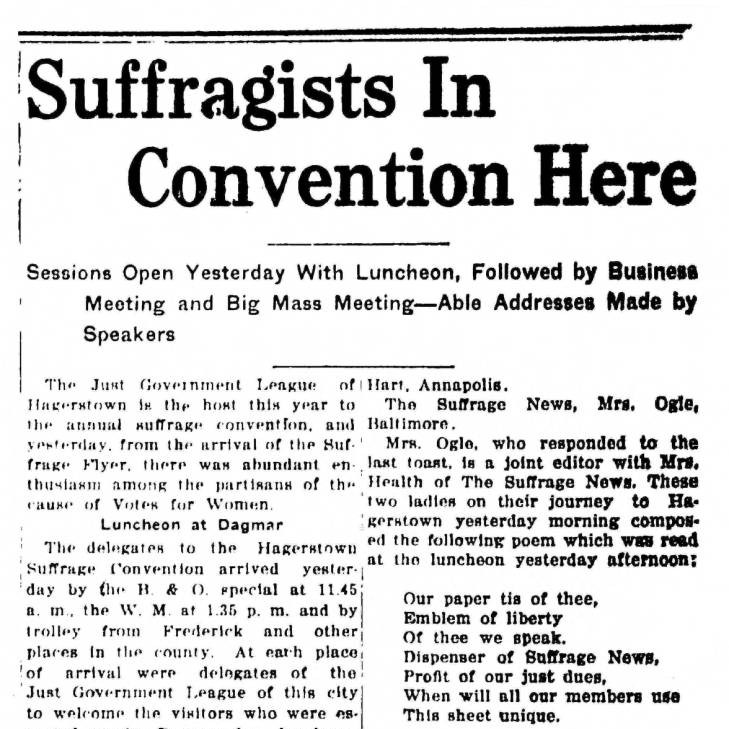 Inspired by the Suffrage Hikers that came through rural Western Maryland in 1913, Crawford helped organize and lead the Washington County Woman’s Suffrage League. Then in 1916, the organization worked hastily to host the annual Maryland state suffrage convention in Hagerstown – cementing the rural town’s role in the suffrage movement. Crawford enjoyed the right and responsibility of voting until her death at the age of 80.

Ballot & Beyond is powered by Preservation Maryland and PreserveCast with support from the Maryland Historical Trust and Gallagher Evelius & Jones.

A headline in The Hagerstown Morning Herald of October 20, 1914 read, “Suffrage Movement Reaches Hagerstown.” Maryland suffragists had been trying to organize in Washington County for years without success. While the neighboring counties of Allegany, Frederick, and Garrett in Western Maryland all had established affiliates of the state’s Just Government League, Washington County was without a single suffrage organization.

Both Washington County and Lilla Crawford may have come to the suffrage movement late, but they came out of the gate strong!

Lillian “Lilla” Reeves was born in PA in 1855 and married George Crawford at the age of 21. The young couple moved to Maryland and immediately started a family, with their first of four children arriving later that same year. By 1900, they had settled in Hagerstown, Maryland, with their two grown children, aged 23 and 18, and their two youngest, aged 6 and 3. The Crawford’s eldest child married and moved away the next year; but sadly, died two years later, so their first grandchild came to live with them in 1903. Thus, Crawford was in her late 50’s and taking care of a household totaling three adults, two teenagers, and a youngster, when she became active in the suffrage movement.

As early as 1892, there had been the occasional suffrage lecture in Hagerstown, but it wasn’t until the dramatic and wildly successful Garrett County hike in the summer of 1914 that the suffrage movement coalesced in Washington County. For 12 days in June, the hikers traveled to 15 towns, rain or shine, holding meetings and signing up more than 800 new members in support of votes for women.

When the suffrage movement finally reached Hagerstown later that year, Crawford was ready. After what was described as an impassioned organizing meeting with 60 women, the Washington County Woman’s Suffrage League was established, with Crawford as president. She regularly hosted meetings of the League, which was an affiliate of the Just Government League of Maryland, in her home. The women planned speaking engagements, public meetings, debates, and activities to spread support of suffrage throughout the county.

In 1915, the League received the delegation coming from Baltimore on their way to call on Congressman Lewis of Cumberland. The delegates stayed overnight in Hagerstown. They distributed literature and made speeches in favor of suffrage in the public square, and arranged a meeting in Boonsboro before heading to Cumberland.

The Hagerstown fair was an important event each fall, described as an “interstate institution,” comprising multiple Maryland counties, as well as Pennsylvania, West Virginia, and Virginia. The 1915 fair had 25,000 visitors the first day and featured 7,000 poultry on display, 200 farmers entered in the Corn Show, and one Just Government League booth in the main exhibition hall. Crawford was among those in charge of the booth that year and in subsequent years as well. The Maryland Association Opposed to Woman Suffrage also had a booth.

In March 1916, the Washington County League received word that the annual state suffrage convention would be held in Hagerstown. As president, Crawford was in charge of the committee making arrangements for the convention at the Masonic Temple. With little more than one month to plan, the women pulled together a successful convention attended by 13 county affiliates from as far away as the Eastern Shore. The League greeted visitors at each point of arrival, from the B&O railroad to the trolley coming from Frederick. The visitors were welcomed and escorted to the Dagmar Hotel, where the dining room was beautifully decorated with white and yellow flowers for a luncheon. The menu included: “grapefruit, spring lamb and peas, escalloped potatoes, tomatoes, Maryland ham, an entrée, ices, coffee, biscuits, cheese, and mints.”

When the Woman Suffrage League of Maryland was formed in 1917, Crawford added state-level officer to her responsibilities. While suffrage activity diminished during World War I, most League women believed that by demonstrating their patriotism, they would advance their position. Thus, Crawford attempted to integrate war and suffrage work; however, she drew a line at the initiative to “Americanize” foreign born residents by instructing them in citizenship. Crawford refused to accept the chairmanship of the Americanization committee because she, unlike male foreign born citizens, was denied the vote.

Upon hearing about ratification of the 19th Amendment in 1920, Crawford was reported to have exclaimed on record, “Glory be!” She lost no time in unfurling an American flag and yellow banners with the names of ratifying states from her porch. At the first meeting of the League after the Amendment passed, the women discussed whether there was any point in asking the Maryland Governor to hold a special session, as Maryland was NOT a ratifying state. Crawford was quoted as saying, “I for one, would not ask one thing of Governor Ritchie. He never was a suffragist and wouldn’t do anything to help them when they were fighting for it in Maryland. I think it would be wasted breath to ask anything of him!”

After the November election, Crawford planned on attending the first meeting of the regional League of Women Voters in New York. The Woman Suffrage League of Maryland had been carrying on voting activities in the state pending the election of officers for the Maryland branch of the League of Women Voters. She was among the 50 female guests at a banquet of the Republican State Central Committee of Washington County, attended by 500 men.

Crawford enjoyed the right and responsibility of voting until her death at the age of 80 in Pennsylvania, the state of her birth.