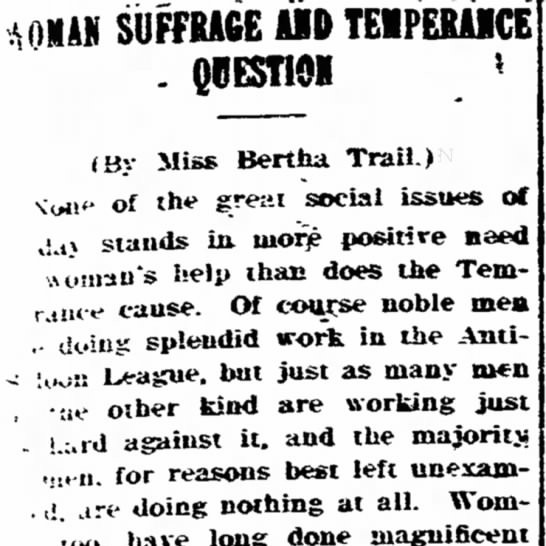 This episode of Ballot and Beyond, contributed by the Maryland Women’s Heritage Center, was written and is being read by Dr. Amy Rosenkrans.

The Trail Sisters worked diligently to win the vote for Maryland’s women. Their writing, speeches and constant activism did not end when the battle was won. Both sisters continued to be active in the community. Bertha was elected President of the Frederick County Republican Club in 1920 where she spearheaded the registration of new women voters.

“Never have I been prouder of my sex and seldom have I heard oratory of greater power…I felt that my cup of happiness was full and almost wept with joy as I realized that I was taking part in a mighty revolution, the dawning of a new and better day for all.” (The News, 1.31.1914)

These words were written by Florence Trail after she participated in a rally during a 1914 Annapolis lobbying trip, sponsored by the Just Government League, Maryland’s largest woman suffrage organization.  This was lofty praise from a highly educated woman who had traveled the world as an educator, author, and musician.

After attending a 1910 meeting where she listened to Edith Houghten Hooker, the president of the Just Government League, Florence decided to dedicate her life to the suffrage cause.  She did this ably, by helping found a chapter of the Just Government League in her hometown, Frederick, and by serving as its first president.  Although Florence was the better known of the family, her mother Ariana, sister Bertha and niece, Grace, all played significant roles in the Frederick Suffrage Movement.

Florence, along with her mother and sister Bertha, were elected to the Board of Directors for the Frederick County Just Government League in 1911.  The directors took turns hosting the monthly meetings, many of which took place at the Woman’s College, later Hood College.  At those meetings, one of the sisters would often give a lecture on pertinent suffrage topics. When the Frederick chapter changed their governing structure to a more traditional format of officers, Florence was elected President.  As such, she chaired most meetings and even hosted them at her elegant home.

In addition to chairing meetings and working to garner support in Frederick, both Florence and Bertha participated in suffrage activities at the state and national levels.  Florence represented the county at the 1913 Suffrage March in Washington DC, held on the eve of Woodrow Wilson’s presidential inauguration, and at state Just Government League conventions.  In 1915, she was selected to represent Maryland at the National American Woman Suffrage Association Convention.  Bertha ended up attending the meeting in her stead and brought back information about the convention to the Frederick chapter as well as to the Frederick Female Seminary Alumni Association Meeting, of which both she and Florence were members.

The Trail Sisters worked diligently to win the vote for Maryland’s women.  Their writing, speeches and constant activism did not end when the battle was won.  Both sisters continued to be active in the community.  Bertha was elected President of the Frederick County Republican Club in 1920 where she spearheaded the registration of new women voters.