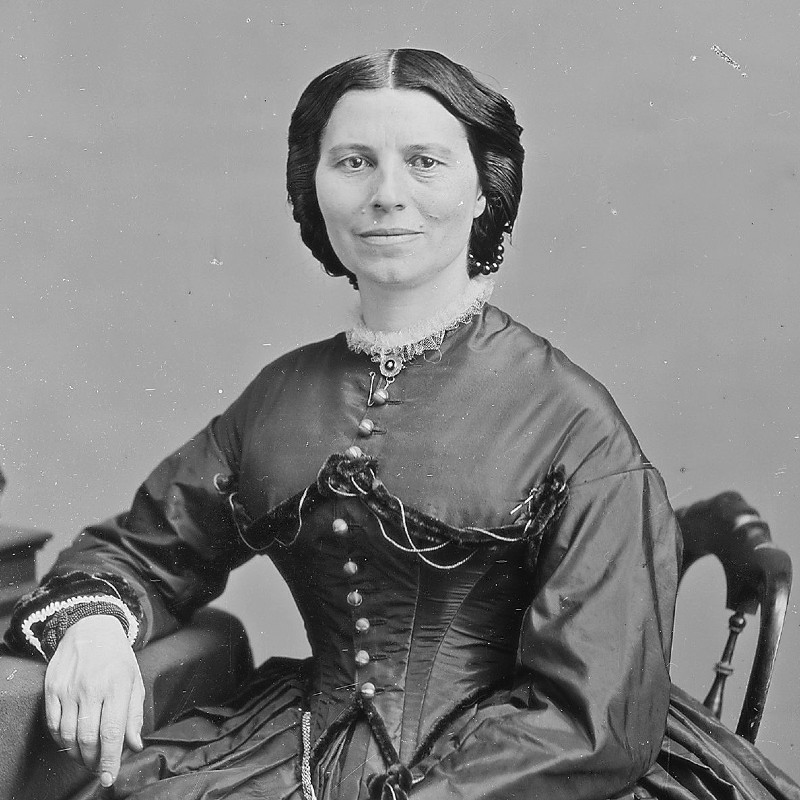 This episode of Ballot and Beyond, contributed by the Maryland Women’s Heritage Center, was written by Audrey Partington. The reader is Kalin Thomas.

Clara Barton is best known for founding the American Red Cross and nursing wounded soldiers during the Civil War. Lesser known is Barton’s support for reform movements like free schools, abolition, and women’s rights. She worked with Susan B. Anthony, Elizabeth Cady Stanton, and other leaders of the movement to enfranchise women.

Ballot & Beyond is powered by Preservation Maryland and PreserveCast with support from the Maryland Historical Trust and Gallagher, Evelius & Jones.

Clara Barton is best known for founding the American Red Cross and nursing wounded soldiers during the Civil War. She was dubbed “Angel of the Battlefield for her courageous work on the front lines at the battles of Bull Run, Antietam, Fredericksburg, Chantilly, Hilton Head, the Wilderness, and Petersburg.

Lesser known is Barton’s support for reform movements like free schools, abolition, and women’s rights. She worked with Susan B. Anthony, Elizabeth Cady Stanton, and other leaders of the movement to enfranchise women.

“I believe I must have been born believing in the full right of women to all the privileges and positions which nature and justice accord to her in common with other human beings,” Barton said in one of her many speeches.

As a teacher at a free school, which she established in Bordentown, New Jersey, and as the first female recording clerk at the U.S. Patent Office in Washington, D.C., Barton insisted on being paid the same as her male colleagues. When the Civil War broke out, she left her job to volunteer.

After the war, women’s rights leaders implored Barton to come to the aid of her sex.

“I am very, very sorry to have taxed you with work for woman’s emancipation as you have done for the slaves and the soldiers,” wrote Susan B. Anthony. “How gloriously our movement would go on if it had the like of your hand, brain and heart to organize systematize, vitalize, and marshall its forces.”

Barton delivered stirring speeches at a number of women’s suffrage conventions. When she was unable to attend, she sent letters of support. Anthony suggested her remarks “might be an appeal from the battlefield to the ballot box … to move our representatives and senators to enact justice to women.”

Barton blamed fatigue and illness on her inability to honor many of these requests. Acting on her doctor’s advice, she went to Europe in 1869 to recuperate.
“The years of unsheltered days and nights, the sun and storm, dews and damp have done their work and now, with bitter tears, I turn my face away from the land I have loved so well and seek in a foreign clime perchance a little of the good strength once lent me here,” she wrote in a joint letter to Anthony and Elizabeth Cady Stanton.

But her rest was short-lived. Barton traveled to the front lines of the Franco-Prussian War, where she volunteered with the European Red Cross. Upon her return to the U.S., in 1873, she began working to create an American branch of the Red Cross, which was established in 1881 with her at the helm.

Her assistance to victims of natural disasters like the Johnstown Flood of 1889 and the Galveston flood of 1900 led to expanding the mission of the Red Cross to include peace-time relief efforts. In her seventies, she went to Cuba during the Spanish-American War, braving the tropical climate to distribute badly needed supplies.

Hard work and dedication to a cause seemed to help Barton deal with a life-long struggle with depression, as described in her diaries as “the thin black snakes” that threatened to close in.

Barton spent the last 15 years of her life in Glen Echo, Maryland, where she continued to head the American Red Cross until her resignation in 1904. That year, she founded the National First Aid Society to promote local emergency medical treatment. The organization later became part of the Red Cross.

At the 1904 annual woman suffrage convention, held in Washington, D.C., Barton held a reception at her home in Glen Echo. Hundreds of convention members attended and were treated, at their request, to a display of her many medals, decorations, and other memorabilia.

Barton died of pneumonia in Maryland on April 12, 1912, at the age of 90. She was buried in her birthplace in North Oxford, Massachusetts. In 1974, her home in Glen Echo, which served for a time as the headquarters of the American Red Cross, became a national historic site – the first dedicated to the work of a woman.